The ‘Dream Team’ is sponsored by Subiaco Sports Massage, and captained by Eamon Sullivan, who owns the popular Bib and Tucker restaurant at the event’s starting line. He said he didn’t want to miss out on this chance to make swimming history.

“Against all the advice, Gerd von Dincklage-Schulenburg took to the water in 1956 and paved the way for hundreds of people to swim the most iconic swimming routes in Australia,” he said.

“We (the team) jumped at the chance of competing in a team of six. Not being as fit as we used to be, this makes it a more enjoyable experience. But for those who are really serious about open water swimming, a new 25km leg has been introduced, which will attract swimmers and swimming opportunities on the national and international circuit.” 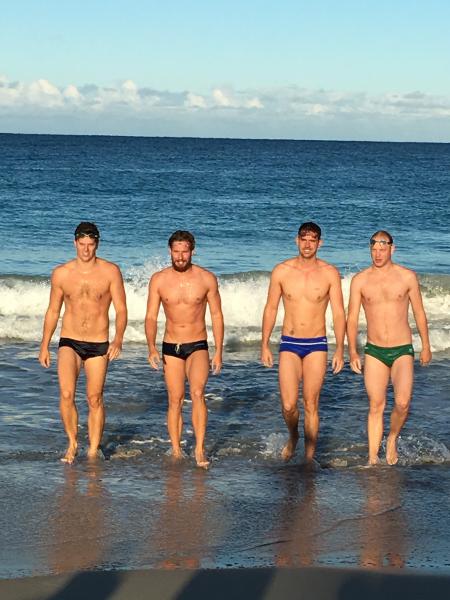 The Hotel Rottnest Port to Pub follows the original swimming route by Gerd von Dincklage- Schulenburg, who swam solo from North Fremantle to Rottnest in 1956, followed two months later by the first amateur swimming race to Rottnest on 25 March.

Les Stewart, who swam in the original race, will compete in the Port to Pub in a team of six and, at aged 80, will be the oldest person to swim across the Rottnest channel.

Mrs Ceinwen Roberts from the Port to Pub committee said swimmers are really responding to the opportunity of sharing load.

“The sheer diversity of swimmers we are attracting demonstrates just how accessible this event is to swimmers of all ages and abilities,” she said.

“We are incredibly honoured to mark the crossing’s sixtieth anniversary with Australian champions, as well as 80-year old Les Stewart, who was one of just seven people to compete in the first amateur race in 1956. His swimming colleague of the time, and original race winner, Trevor Seaborn, will do the honours of sounding the starting horn in what will be the most authentic tribute to the swim’s history – making history in itself.”

LOOK WHO YOU’LL BE SWIMMING AMONGST

Eamon is a three time Olympian and former world record holder in the 50m & 100m freestyle. Eamon won two silvers and one bronze medal at the 2008 Beijing Olympics and is a world champion and Commonwealth Games Gold Medalist.

Mark was a member of the Australian Team at the 2004 World Championships in Indianapolis and 2005 World Championships in Montreal. He held Australian SC and LC records in 50m breaststroke and was an AIS scholarship holder from 2002-2005. Mark retired in 2006 and, after completing study at UWA, has resided in Melbourne, London and currently Sydney.

Travis is a dual Olympian having competed in the 2004 & 2008 Olympic Games. He is also a Commonwealth Games medalist (Melbourne 2006) and has represented Australia at five World Championships. Travis has won numerous team and duo Rottnest Channel Swim crossings and, with team members, holds the current records for the fastest crossings in these categories. Travis is now the high performance coach at the Tuart Hill Swimming Club.

Jim moved to WA post competing at the 2004 Athens Olympic Games. He was a member of the Australian Swim Team for 7 years between 2001-2008. Jim is a World Short Course and Commonwealth Games Gold medallist, and retired from competitive swimming in 2008.

Perth born Bobby has only recently retired from a 17-year swimming career. Bobby represented Australia on multiple Australian teams such as Oceana's and Pan Pacific Games. He is still ranked as one of the top 10 fastest Australian backstrokers ever. Bobby is now a National Age Swim Coach at Breakers Swimming Club hoping to pass on all the experience and knowledge to the future stars of Australian swimming.