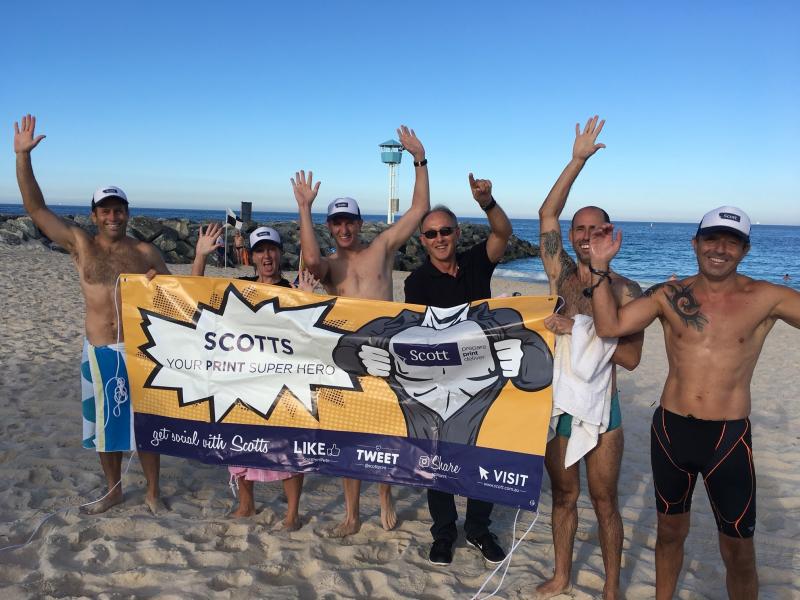 As a family-owned WA company started in 1979, Scott Print has always looked to give back to the community, and after its support at our inaugural Port to Pub in 2016, we’re thrilled to have the Scotts team back on board as a sponsor again this year!

The third generation of Scott Print, and current owners, Tim and John Scott, are avid surfers and keen open water swimmers. Both have taken part in over a dozen channel crossings, with John completing a solo in 2012.

The pair took part in the inaugural Port to Pub swim in March last year - John in a duo team with Simon Bedbrook, and Tim in a team of three with Steve Neale and Luke Colston.

Representation from Scott Print has tripled in 2017, with seven employees taking part!

Everyone has been putting in some good training sessions. John says, “the Port to Pub swim has been a great addition to the swimming calendar and I’m stoked to have a full ‘Scott Print’ team competing in this year’s event.”

“Swimming takes commitment, passion and perseverance – traits that we also take into our business. With a real commitment to excellence and quality, our team is here if any of the Port to Pub community needs design or printing. Our company is passionate about offering an environmentally friendly solution, and we’re working with many of the state’s largest companies.”

Scott Print will proudly print the 2017 Port to Pub yearbook and the rest of the event’s marketing materials.

Good luck to all of the Scott Print swimmers!!