In the Port to Pub’s inaugural year, five members of the Smoothy family will take to the water.

The Smoothy family’s love for swimming started due to health reasons. Martin wanted to increase his fitness following kidney failure and a heart condition.  Martin then took Samuel to the pool in an effort to help him get fit while recovering from cancer treatment involving steroids. Sam wasn’t the best at other sports however he was attracted to swimming as he found it was a sport he enjoyed. After missing out on a Rottnest Channel Swim duo ballot in 2014, Martin and Sam decided to train for a solo crossing, which they completed earlier this year. In another extraordinary feat, Martin and Sam swam the English Channel together in July this year.

Sister Esther competed in a team of four this year. Luke began competing in open water events after watching his brother Sam enjoy swimming competitively. Meanwhile, Casey wanted the opportunity to compete as well and has taken the chance to do so with her brother in the Port to Pub swim. Being married with two children, Casey has to plan ahead to fit in training sessions.

The Smoothy family all train in Shelley Taylor Smith’s squad.

We wish all the Smoothys the best of luck in the Port to Pub swim! 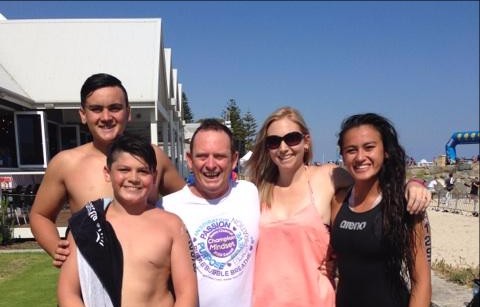