MEET OUR SWIMMERS: The Sea Hags 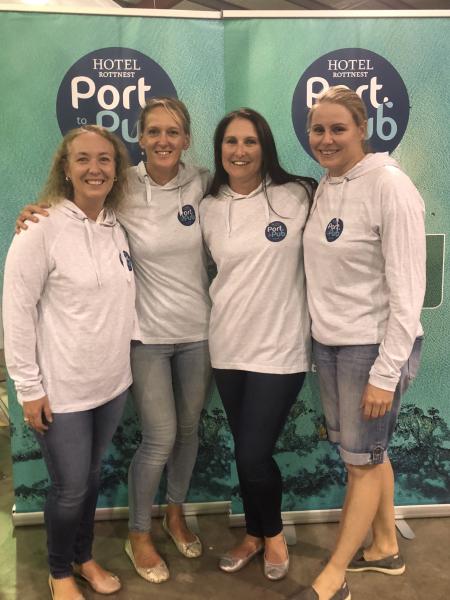 We are celebrating our fifth year of Port to Pub and there are a few swimmers who we're proud to say have participated every year of the event.

The Sea Hags – made up of Chelsea Begley, Jaye Reynolds, Sally Flavel and Emma Johnston - is one of those teams.

“We swam in the Port to Pub’s first year and we were the first female team of four over the line. We have managed to keep our record since 2016. We had also managed to win the female team of four category every year, until last year when we were beaten by three seconds! There was no choice for us except to return again in 2020!!

The team is made up of me, my sister Jaye Reynolds, along with Sally Flavel and Emma Johnston. Jaye and I met Emma at Thornlie swimming club when we were kids and I met Sally about 20 years ago through our husbands. So, it’s pretty special for us having such a long-term bond.

The four of us have always swum. As kids we all followed that black line up and down the pool and we all competed at various levels. As young adults we all made the move to open water swimming. Most of our kids are right into surf club, so we still spend a lot of time at the beach and in the water.

Our busy schedules mean that we all do our training separately – in fact the only time we all get together before race day is the briefing night!

We’re really looking forward to Port to Pub this year. I’d love it if we could break our own record and finish in under 5 hours. 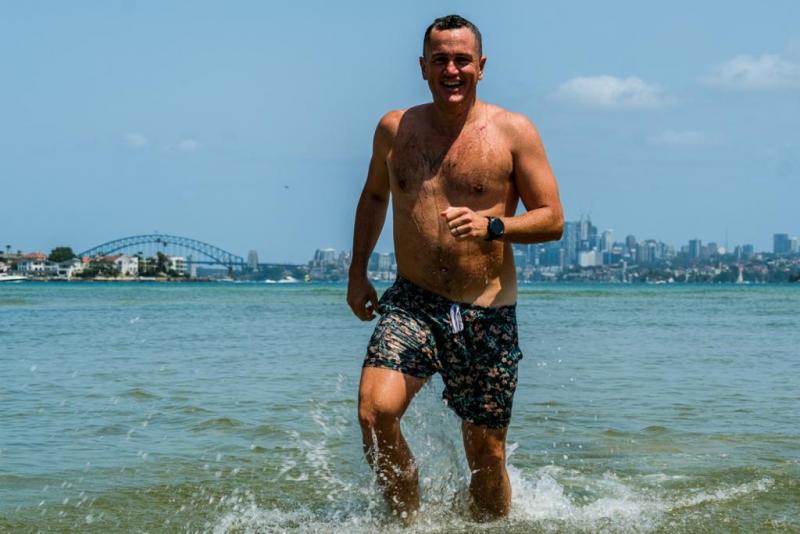 Perth-born Sydneysider Michael Pell is taking on the 19.7km solo in this year’s Channel 7 Port to Pub with Hotel Rottnest.

He’s swum across the Rottnest Channel in teams before but this year marks his first solo challenge.

He admits he’s more of a runner than a swimmer but, as he told Port to Pub’s Jane Munday he’s driven by a cause close to his heart.

“I always wanted to commit to a Rottnest solo, but I was pretty scared about it.

In 2011, we were devastated to lose my Dad from Motor Neuron Disease (MND), after a diagnosis only a year earlier. Committing to a solo swim has been a huge deal for me, but I have found the strength to commit by honouring my Dad’s memory and fundraising for FIGHTMND, which supports the Cure for MND Foundation

Rottnest is a special place for me. My Dad used to take me there every Easter and Christmas holidays growing up - I know he would be very proud to see me swim solo to Rottnest in the Port to Pub. I became a proud father to Oscar two weeks ago, so that’s motivating me even more.

I’ve been training with VladSwim and been swimming 4 sessions a week at the Andrew Boy Charlton pool and one in the ocean in any of Sydney’s many great swimming spots. I’m going to be swimming in a tandem solo with my mate Stuart Wesley, who lives on the Mornington Peninsular in Victoria, so we can encourage each other along the way.

I find swimming really meditative. I think about Dad a lot. And now Oscar too. I think about [former Essendon player] Neil Daniher who’s another inspiration for my solo swim. I think ‘my solo swim is nothing compared to what he and my Dad have had to go through.’ And that really spurs me on.

My wife Karen and Oscar, my Mum and sister will all be there to see me at the finish line. They’re really proud of me.

I’ve raised over $12,000 already and I’d be grateful for ay donations and support to help FIGHTMND and find a cure for this disease.” 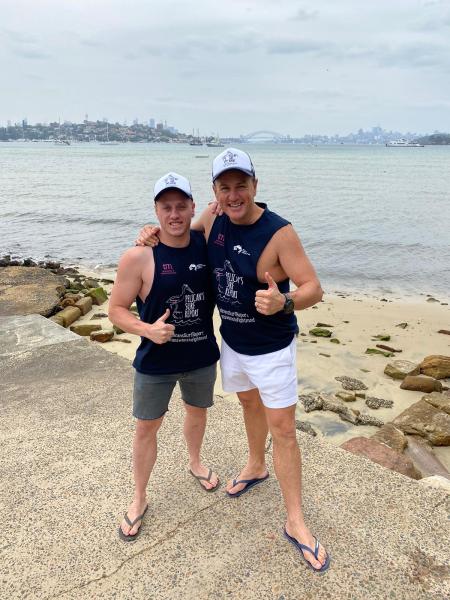 Michael is doing a solo swim with Stuart Wesley. 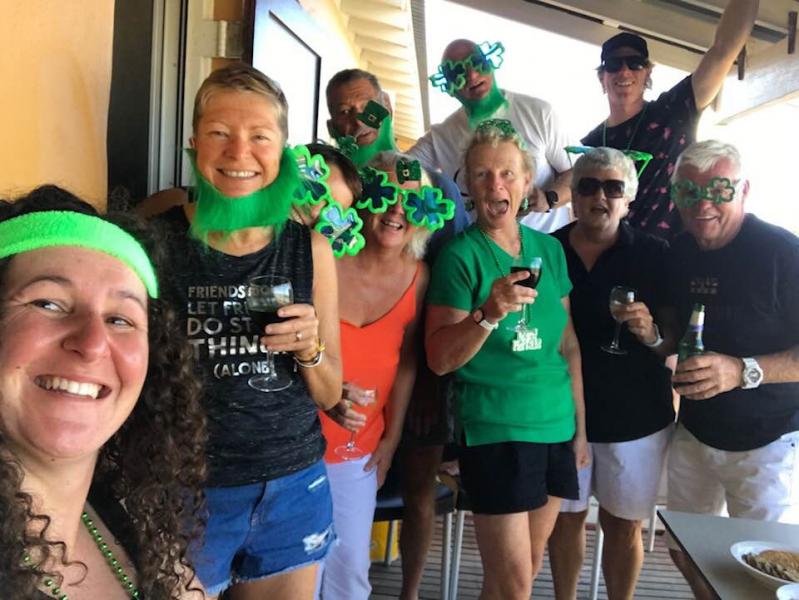 The Cin Cin Girls making a pact on St Patrick's Day to swim in 2020.

Team of six, The Cin Cin Girls are a very special bunch to the Port to Pub team. 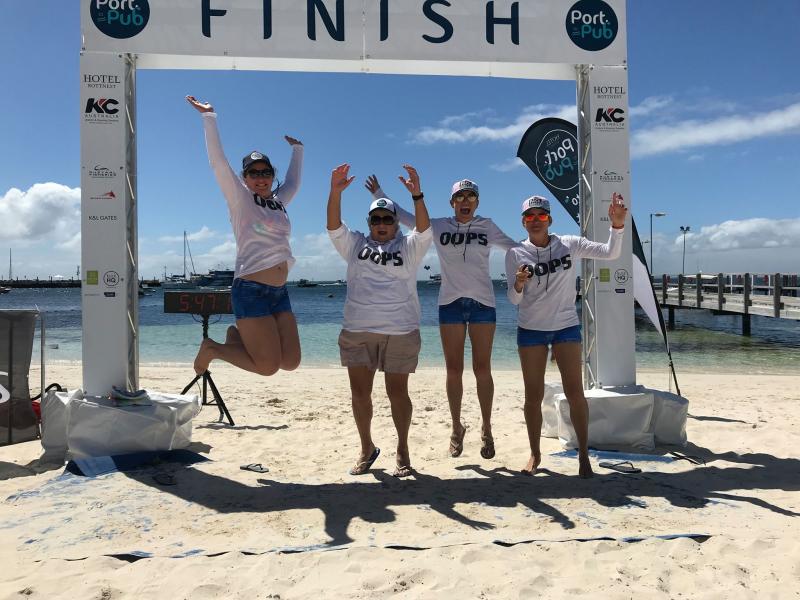 Felicitas Schwarz (Flic), Di Twigg, Patricia Doohey, Sheridan Lister, Karen Parbery and Sarina Bowyer have been involved in the Port to Pub every year since it started.

Not all of them were always swimmers but one way or another they found swimming. It has become their passion and they have now swum together in a squad for years, forming wonderful friendships along the way, writes Port to Pub’s Jane Munday.

Ten years ago, on a flight to Perth from Germany (where incidentally she met her now husband), ocean swimming was about as foreign as Australia to Flic.

“I wasn’t a swimmer at all. I love endurance sports but I hadn’t ever swum races in the ocean.”

She moved to a house on the coast and found herself by the ocean more and more. Seeing the start line of the Rottnest Channel Swim was the moment she was convinced she wanted to swim to Rottnest. She completed her first Team Channel crossing in 2013 and hasn’t looked back. It’s a passion she now shares with her husband Scott.

“Scott is from Edinburgh. He couldn’t swim freestyle when he came to Australia. With a lot of dedication, he learned freestyle and did his first solo crossing in 2014. He’s swimming the Port to Pub 25km ultra-marathon next year. How good is that?”

Flic [and Scott] met the rest of the team – Di Twigg, Trish Doohey, Sheridan Lister, Karen Parbery and Sarina Bowyer when they joined the Barracudas swim squad at Churchlands.

“We quickly became friends. We swim together and we party together! It’s such a nice group of people and I have always felt encouraged. It is what has made my move to Australia so special and gave us a sense of belonging,” said Flic.

They now train together at Scarborough Pool as often as possible, and fit in ocean swims where they can. 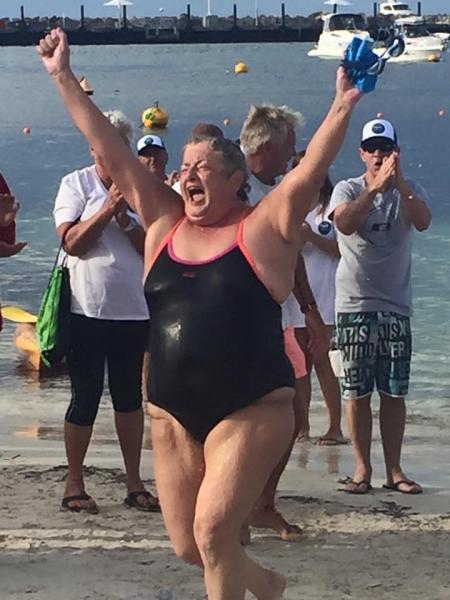 Most of the team is in their 50s and 60s (except Sarina!). They have over 11 solo swims between them and many, many duos and team swims.

Port to Pub swimmers will well remember Di Twigg’s epic solo in 2016 (pictured) – the first year of Port to Pub. After a disqualification at the Rottnest Channel Swim a few week’s earlier, she took on the Port to Pub 19.7km solo swim. She reached Rottnest with 10 minutes to go before the cut off time and had been in the water for over 10 hours. She was met at the Island by the loudest of applause – the whole crowd ready to celebrate her achievement. After her swim, Di said: “If you can’t come first, come last, you get an even better reception.”

Sheridan Lister, Trish Doohey and Karen Parbery are well known and long-time members of the WA swimming community and so is the ‘youngster’, Sarina, a former national water polo player.

“We love the atmosphere of Port to Pub. That’s why we have done it every year. It really is a swim for all and I think we’ve shown that you’re never too old to swim –  or to do a solo swim. I didn’t think it was possible, but it is,” Flic added. 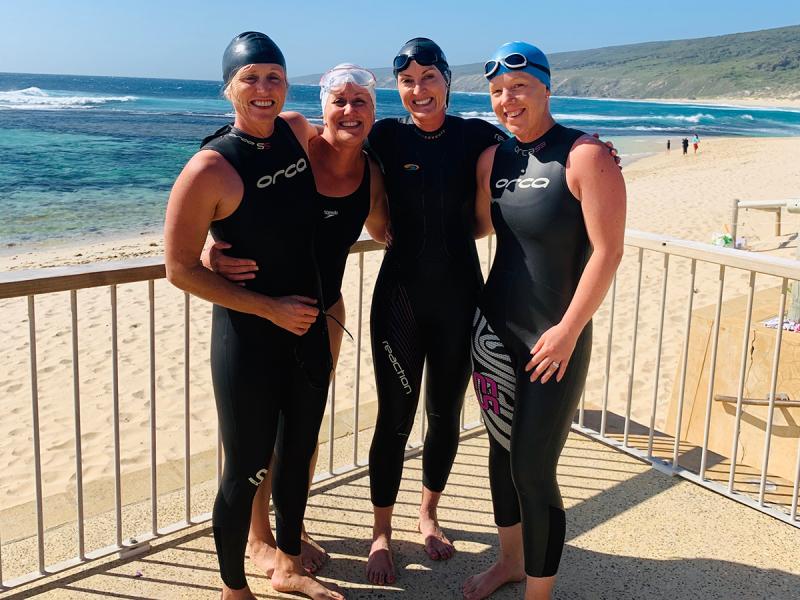 The Yallingup Lagoon is proving a great training base for four South West mums swimming in a team called Hot Chips!

Dunsborough’s Monique Vollprecht, Sarah Breheny, Louise De Chiera and Jane Heaven have spent the winter training in the Busselton Pool, and are very happy to be back in the Yallingup Lagoon for their 6am swim sessions, where they swim a roughly marked triangular route that varies with the effects of the tide.

“I love the lagoon, it is really protected. At the moment, it’s still quite cold but it’s exhilarating,” said team captain Jane Heaven.

Heaven swam at school, but really started enjoying it once she moved to the south-west, when a group of girls started swimming together and entering races along the way. “I don’t really love pool swimming – the black line and chlorine - but it is so refreshing to swim in the ocean and I love having the sea life to look at. And I love the morning swim - you feel amazing for the rest of the day.”

“I had always wanted to swim to Rottnest, but I thought it was for elite swimmers until the Port to Pub event. This race seemed to have a lot of opportunity for everyone. So we decided to give it a go and we had such a great time we wanted to do it again.”

Teammate Monique Vollprecht agrees, “We swam in the inaugural Port to Pub and we won our team’s category. I love the team aspect of the Port to Pub and competing with beautiful, supportive friends.  Doing a team event makes you accountable and motivated to train.”

Louise De Chiera said she had always enjoyed swimming but her passion kicked in when she joined Swimming Women in Busselton. “With a swim coach and gorgeous women by my side I have grown to love swimming more and more which has extended to a love of the ocean. I love the beautiful friendships that have been created in the water, the laughs and meditative feeling of swimming.

“I never thought I would swim to Rotto but with the support of three fabulous girls who have done it before I am excited for the Port to Pub.”.

Heaven says the biggest challenge for the team is time – finding the opportunity for the team to get together around their families’ schedules. “But the enjoyment we generate from swimming training together far outweighs any other challenge. We finish an event and enjoy it so much we sign up for the next one straight afterwards!”